← more from
Okehdokee Records
Get fresh music recommendations delivered to your inbox every Friday.
We've updated our Terms of Use. You can review the changes here. 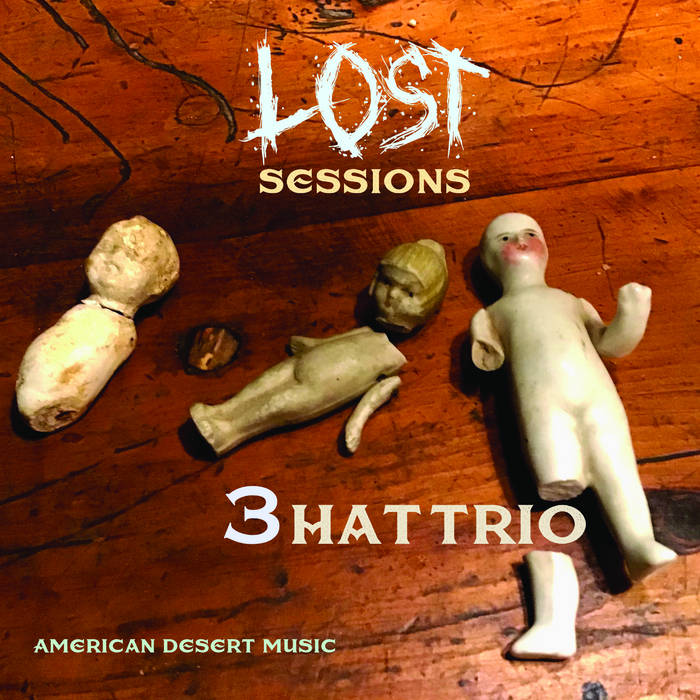 American Desert Music group 3hattrio (three-hat-trio) return with their first studio recordings since 2018’s acclaimed Lord Of The Desert. With The Lost Sessions, 3hattrio continue to explore the frontiers of desert music, setting up an outpost amongst the starkly beautiful terrain of ambient music.

Despite this sonic expansion, the group is still inextricably an organic enterprise. Their sound is carried amongst the ongoing evolution of roots music, bound by their instrumentation of banjo, violin, and upright bass. In The Lost Sessions these instruments combine in new ways that redefine their traditional purposes. Greg Istock’s bass notes are smoothly drawn out in ways that mimic a warm synth pad, or plucked with enough punch to create a natural envelope filter effect. Hal Cannon’s banjo delivers muted chops to drive the tracks forward, or plucks repeating patterns that merge into a Steve Reich-esque soundscape. Eli Wrankle’s violin delivers his sweeping melodic lines delayed and distorted, or shifts amongst the upright bass and banjo lines, tightly plucked in a manner that renders it deceptively indistinct from either instrument.

It is not just the wood and wire instruments that are being reapproached on these songs. Cannon and Istock apply vocalizations throughout; expressing emotions and telling stories in hums, chants, and yelps. At times, words are incorporated and ride on top of the music, at other points they sit amongst it with snatched phrases revealing themselves sporadically. Cannon explains, “my solo instrument, my improvising instrument, is my voice so sometimes the words are secondary.”

Despite these bold new approaches, listeners should be in no doubt though that these tracks are still very much 3hattrio, it’s just that the hats are worn at different angles.

While 3hattrio is built on collaboration, their recordings also occasionally provide an opportunity to highlight the skills and creative vision of individual members. With The Lost Sessions, we get a particular insight into Istock’s musical mind . The arrangements, mixing and production were overseen by his guiding hand. He offers some insight into what drives him, “These experiments show us we can be free to make musical sound that is not like any song, nothing like we’d made before. We are not playing a song anymore. We were playing a feeling, a picture of place or an occurrence. Once we played a virtual train wreck.“

The name of this album is a nod to the convoluted circumstances that led up to its release. The trio had spent a summer in their Virgin, Utah, studio improvising together, finessing and capturing a selection of these new compositions. Shortly after the completion of recording these boldly experimental new tracks, the group was dismayed to watch the hard drive that contained the audio files being crushed by a falling piano. Reflecting on the experience of viewing their hard work appear to have become rendered irretrievable, Greg Istock observed that “lost can carry different meanings. It can be something misplaced with hopes for resurfacing but this loss was brutal and final, a cruel twist of fate.”

Later that year Istock found a company that specialized in retrieving lost data from crushed hard drives. Initial efforts were encouraging with some files revealing themselves. A fresh drive with the recoverable data was promised to be delivered shortly, however, on arrival, this new drive was entirely blank. A call to the company failed to offer much cause for hope. It came as a welcome surprise then to receive a package out of the blue a couple a months later. Inside, a hard drive loaded with recognizable file names. It was the music, the scorched data, almost sacred in its mysterious loss.

Thus then, what was once lost is now found and all that is left is to enjoy the rewards. So, turn up the volume and immerse yourself in this music that both evokes and reimagines the desert southwest. Spend time amongst these sprawling landscapes that are resistant to give up their secrets without exploration. Uncover these songs that Cannon describes as “little packages filled with mystery”.

Bandcamp Daily  your guide to the world of Bandcamp

Semiratruth joins the show to discuss their latest release, "loading..".